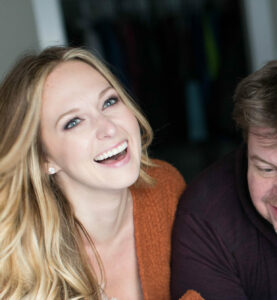 Callie Dauler has worked in entertainment for the better part of 15 years. She started her career in artist management and tour marketing with Red Light Management as the day-to-day manager for artists STYX, Don Felder, Blackhawk, Outlaws and Robin Meade. After leaving the music world, she dove right into TV as the right hand to Robin Meade, the longest-running morning news anchor on television. After Jeff started his own morning radio show, she turned her status as a talking head on Instagram from a hobby to a career and has worked with major brands such as Vital Farms, Hallmark, RaceTrac, Coca-Cola, Doctor on Demand and Pottery Barn, among others.
In 2019 she joined her husband Jeff to launch a daily podcast called The Upside with Callie and Jeff. The combination of her ability to connect with an audience and Jeff’s successful 25 year morning radio career proved to be a fast success.
The duo charted in the top five on Apple Podcasts and have held the #1 spot on Podcast Magazine’s Hot 50 list for 9 consecutive months. Callie lives in Atlanta with Jeff, their baby daughter Ellie and their two rescue dogs.