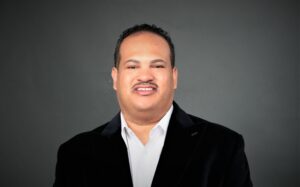 Whether mentoring talent, creating content or writing about his life experiences. Radio One’s Vice President of Programming Colby “Colb” Tyner is one of the most respected radio executives in the country. He has demonstrated that with passion, hard work and a commitment to excellence one can live their dreams.
Colby started his broadcasting career at the age of 17 when he acquired an internship at Power 99 (WUSL) in Philadelphia during his freshman semester at Temple University where he earned a degree in Criminal Justice. He soon stepped into the spotlight as the creator and host of Radioactive, a groundbreaking award winning hip-hop radio show. In later years Colby eventually ascended to a programming management position and co-hosted a very successful morning show with television host Wendy Williams.
In 2002 Colby was looking to expand his programming experience and headed to New York City to help launch the legendary radio station Power 105 (WWPR). That experience of building a radio station from scratch gave him the spark to further his broadcasting management ambitions. Colby was offered an opportunity of a lifetime to go back to Philadelphia and become the Program Director and afternoon drive host at WPHI. During his five plus years WPHI ratings soared. In his time as PD he received six Philadelphia Air Awards including the Milestone Award for over 20 years of service in the Philadelphia radio market.
Colby is a very accomplished on air talent as well known best for his compelling interviews with President Obama, President Clinton, Michelle Obama, Jay-Z, Will Smith, Quincy Jones and more. In 2009 after many years in Philadelphia market he was named Operations Manager of Radio One Cleveland’s cluster of legendary stations WENZ, WZAK, WERE and WJMO. During his time running operations the Radio One Cleveland cluster had record setting ratings and revenue growth. In 2014, Colby was promoted to Vice President of Programming at Radio One relocating to their Washington D.C. offices. In this new position Colby directly oversees various radio brands with diverse formats across the country, managing syndicated programming and talent, cultivating new talent, compelling on air and on line content creation, implement digital initiatives and manage relationships with recording artists and record labels.
Throughout his career Colby has maintained a commitment to the community making sure his brands were heavily involved. In 2005 WPHI-FM was nominated for a Marconi award by the National Association of Broadcasters and in 2006 WPHI-FM was nominated for a Crystal award. In 2011. Colby was nominated for a prestigious Marconi Award for Air Personality of the year. In 2012, to help stem the violence in the city of Cleveland he created the “Think Before You Act” campaign which served as a template for other radio stations around the country on how to get young people engaged in stemming violence in their communities. Going back to his on air talent roots, in 2017 Colby launched the “Backstory” Podcast which features a compelling mix of classic and current content. Colby is also a screenwriter with several projects being pitched for TV and Film.
Social Media: FB: @OfficialColbyColb Twitter: @ColbyColb Instagram: @officialcolbycolb SnapChat: @OfficialColby LinkedIn: Colby Tyner