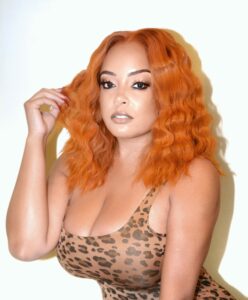 A well-known force in the music industry and on your radio via the nationally syndicated “Morning Hustle Show,” Lore’l is a voice and presence that you will never forget!
Brooklyn born, New Jersey native Lore’l first gained fame after launching her rap career that landed her on the radio at only 16 years old. Her signature voice, laugh and boisterous personality captured the attention of television producers who cast her on Season 3 of VH1’s hit reality series “Love & Hip Hop: New York.”
Favored by fans for her hard- hitting humor and salacious questions, in 2016 Lore’l became a staple as a co-host on Angela Yee’s “Lip Service” podcast. In 2018 Lore’l launched her very own “Bully and the Beast” podcast with Wax Kyng, which was an immediate success. She now hosts another hit podcast called “The Undressing Room” alongside Eva Marcille of the syndicated Rickey Smiley Morning Show.
Lore’l credits her success to genuine relationships that she has forged across the entertainment field. You can hear her dynamic personality weekday mornings on Radio One’s “Morning Hustle Show” in over 40 markets across the country or you can catch her wherever you listen to podcasts. Lore’l is a rising star with a bright future…stay tuned for what else is to come!
Social Media: @starringlorel